From zsh to fish: A Complete Setup Guide

The features and improvements it makes on plain old bash are impressive. But as my needs change, so does my shell. In this post, I will lay out my motivations for the switch, along with some details of my new configurations and all the gotchas that I had to endure!

Fist, let me be very clear - I know that zsh + zprezto + zplug is really awesome, and you can almost certainly configure zsh to do almost everything that you with the fish shell - well, at least everything I am gonna describe in this post.

fish is a smart and user-friendly command line shell. This post is about things that make fish great, all the caveats, and the plugins that I use, hoping that might be useful to you as well! Some of my favorite fish features are:

One of the main attractions of all of my favorite products is that things "just work"! This lets me focus on other little and important things. The features they do ship are polished, and have sensible defaults, and are intentional. I rate fish shell in the same category of my favorite products. It comes with all the sane default features:

Lets go into details of some of these features. 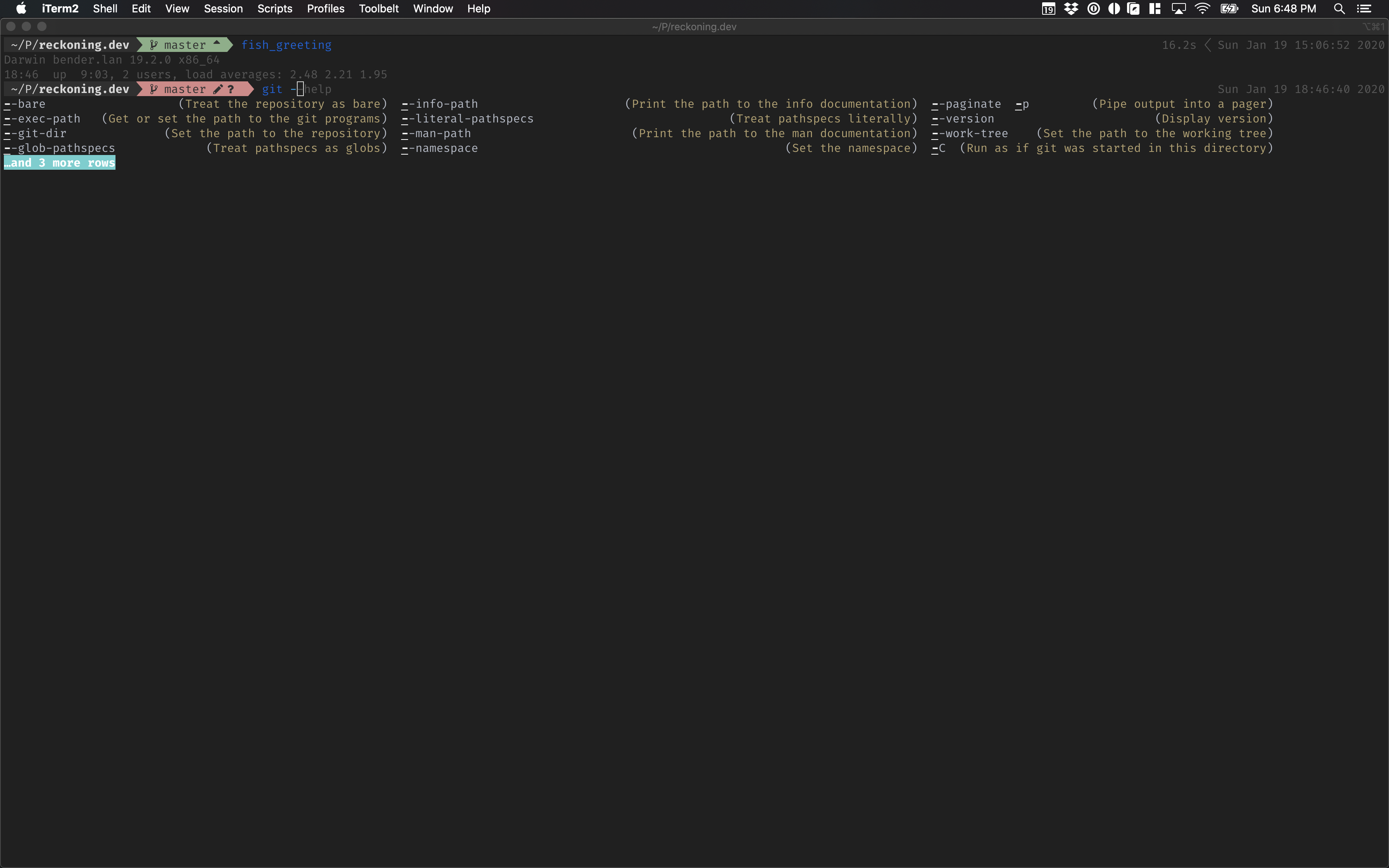 fish is super fast compared to zsh - especially if you have been using plugins in zsh to get all the features from the fish shell. The overall experience for me feels snappier and more responsive. Since I'm using the terminal to be more efficient and get things done faster, speed is one of my top requirements for my shell.

This is the main reason I moved to fish. I originally was using the zsh-autosuggestions which is "Fish-like autosuggestions for zsh". The best things I liked about it is the autocomplete and suggestions are inline and works for almost anything and its based on history and what not. For example, it works with switches like ls --he and it gives you ls --help. While I type the prompt auto-suggests my previous commands (by recent and most used). This is far quicker than ctrl+r and usually shows me the command I want 80%+ of the time. It really saves time and it start as soon as you type the first letter. Left arrow to auto-suggestions and tab for auto-complete. worth mentioning, alt+left arrow to just take the first part of the suggestion and you can hit it until you get there!

To move curser forward/backward one word

To move cursor to the start/end of the line

fish comes with a rich set of tab completions, that work "out of the box." Press Tab, and fish will attempt to complete the command, argument, or path. If there's more than one possibility, it will list them:

Very intuitive. fish performs syntax highlighting as you type. Invalid commands are colored red by default. A command may be invalid because it does not exist, or refers to a file that you cannot execute. When the command becomes valid, it is shown in a different color. fish will underline valid file paths as you type them.

fish supports the familiar wildcard *. To list all JPG files:

One can also use multiple wildcards.

Especially powerful is the recursive wildcard ** which searches directories recursively:

Apart from these, there are tons and tons of features that might be of interest to you. Please take a detailed look at the official tutorials and the documentation.

Installing fish is as simple as installing something from any major package managers. On a Mac, you can install it via HomeBrew:

In order to setup it as default shell, you have to edit /etc/shells file to add /usr/local/bin/fish as an entry to it (highlighted below in the codeblock):

Now you can change the default shell:

As mentioned before, most of the above mentioned features should be working out of box. Keep on reading further, if you wish to fine-tune fish further to your taste.

The primary config file for fish (.bashrc/.zshrc equivalent) is located at $HOME/.config/fish/config.fish. You might have to create one to start with:

My preferred package manager is Fisher.

Fisher is a package manager for the fish shell. It defines a common interface for package authors to build and distribute shell scripts in a portable way. You can use it to extend your shell capabilities, change the look of your prompt and create repeatable configurations across different systems effortlessly. A good summary of its features are:

Installation is as simple as:

All options for fisher to mnage packages can be seen here in the following screenshot:

Here is a list of plugins that I use:

Bobthefish - my favorite prompt theme that I had tried to mimic in zprezto as well. Here this theme is a first class citizen. All I had to do was to add following modifications to my config.fish file:

Similar to the infamous oh-my-zsh framework for zsh, oh-my-fish is a framework for the fish shell. However, I feel its bloated and does not match my taste. Since fisher supports all of its plugins, I cherry picked some of the useful plugins from it:

Bax is a POSIX shell execution wrapper for the fish shell. Use it to run bash utilities, replaying environment changes in fish without leaving the comfort of your session.

An example use case:

Integrate fzf functionality into the fish shell! fzf is a general-purpose command-line fuzzy finder. It's an interactive Unix filter for command-line that can be used with any list; files, command history, processes, hostnames, bookmarks, git commits etc.

fish-nvm is a pure-fish, Node.js version manager! No dependencies, no subshells, and no configuration setup - it just works. It has support for .nvmrc files, and seamless TAB completion support.

fish-sudope is my modification of the oh-my-fish/plugin-sudope plugin. This plugin is to prefix any command with sudo or remove sudo from it, via a key binding. In my modification, I use ESC+ESC keys to achieve this.

One of the philosophies of fish is all aliases are just functions. And all functions are lazy loaded. Hence, for creating any kind of aliases (specially the ones that I have got used to from zsh days), I ended up creating separate ALIAS_NAME.fish files in the $HOME/.config/fish/functions folder.

Following snippets shows all of my personal aliases.

Alias for updating the machine, including HomeBrew, fish, fisher and the App Store apps:

Finally, an alias to manage Music app from the shell:

Additionally, I had to encounter few other tricky situations to get everything working as per my liking. In this section, I am going to describe some of that for particular tasks that I intended. These might not be relevant to you, but in case you use a similar setup as mine, these might come handy.

This one is quite straight forward. In order to get code command working from the shell, I had to add VSCode to the path. The best way to add anything to path in fish shell is via the fish_user_paths variable.

Similarly, we can setup correct VARs as:

anaconda is my preferred way to setup python environment. Once installed, I had to add the main conda to the path via fish_user_paths:

Then enable fish shell integration by running the following command:

The above command ends up modifying the $HOME/.config/fish/config.fish file by adding following to it:

Last remaining issue was having conda env name being shown on the right prompt as well. This happens since the PS1 setting conda config --set changeps1 False is ignored by the fish shell.

The solution to this issue is to add following to your $HOME/.config/fish/config.fish file:

As a final note, I also disbled the base env (similar as I had done in zsh):

And, added a function to activate my personal env on demand:

This brings an end to my notes on setting up fish shell. Let me know if you have any additional comments. I would love to hear any of your suggestions that could make my setup easier and better. Lets keep fishing!

Feel free to email me about anything. Want some advice? Give some feedback?

You can also reach me around the web: GitHub, Twitter, LinkedIn