Object detection is useful for understanding what's in an image, describing both what is in an image and where those objects are found. In general, there are two different approaches for this task –

In this article, we are going to focus on a particular algorithm that belongs to the one-stage group. You only look once, or YOLO, is one of the faster object detection algorithms out there. Just recently, a new version of it YOLO v4 has been published. My goal here is to describe all the new updates made to this algorithm in this new version. The YOLO v4 paper focuses on developing an efficient, powerful, and high-accuracy object-detection model that can be quickly trained on standard GPU.

Essentially, the object-detection neural network is usually composed of three parts. The authors named them backbone, neck and head.

Backbone is usually deep architecture that was pre-trained on the ImageNet dataset without top layers. These are typically one of common CNN architectures like Resnet, VGGNet, Mobilenet etc. YOLO in particular uses a specialized version of backbone called 'Darknet'.

Head is a part of the object detection model that is used for the prediction of custom classes and drawing bounding boxes around objects. Based on the type of the head, we can distinguish two types of object-detection models described above. These layers can also be described in terms of dense predictors (one-stage detectors) or sparse predictors (two-stage detectors).

"Backbone" of YOLO v3 is a 53-conv layer network called Darknet-53. You can view of this as a resnet-like architecture. For the "Neck", three different scales are used and three different scales are combined via upsampling and concatenation. See the complete network diagram below for details. Finally, the "Head" is a series of conv layers for dense predictions of box regressions and classification scores.

The shape of the detection kernel is 1 x 1 x (B x (5 + C) ). Here B is the number of bounding boxes a cell on the feature map can predict, “5” is for the 4 bounding box attributes and one object confidence, and C is the number of classes. In YOLO v3 trained on COCO, B = 3 and C = 80, so the kernel size is 1 x 1 x 255. The feature map produced by this kernel has identical height and width of the previous feature map, and has detection attributes along the depth as described above.

The stride of the network, or a layer is defined as the ratio by which it downsamples the input. In the following examples, I will assume we have an input image of size 416 x 416. YOLO v3 makes prediction at three scales, which are precisely given by downsampling the dimensions of the input image by 32, 16 and 8 respectively.

YOLO v3, in total uses 9 anchor boxes. Three for each scale. Authors use k-means clustering to determine our bounding box priors. In total they choose 9 clusters and 3 scales arbitrarily and then divide up the clusters evenly across scales - arrange the anchors is descending order of a dimension. Assign the three biggest anchors for the first scale , the next three for the second scale, and the last three for the third. Hence, at each grid point, YOLO v3 predicts 3 boxes at each of the scales, thus predicting a total of 13x13x3 + 26x26x3 + 52x52x3 = 10647 boxes for each image!

The complete loss terms related to localization for YOLOv3 can be seen in the figure above. In summary, The network predicts 4 coordinates for each bounding box, tx​ , ty​ , tw​ , th​. If the cell is offset from the top left corner of the image by (cx​ , cy​) and the bounding box prior has width and height pw​ , ph​, then the predictions correspond to:

Authors introduce two terms Bag of freebies (BOF) and Bag of specials (BOS). Bag of freebies refers to the methods that affect training strategy. One such method is data augmentation, which is used to increase the variability of the input images and make the model has increased robustness. Other methods that could be considered as Bag of freebies are random erase, CutOut, grid mask, DropOut, DropConnect, etc. All these methods temper with the input images and/or feature maps and remove bias from input data. Another set of bag of freebies could be related to loss terms associated with bounding boxes - instead of traditional mean squared loss, using a loss term that is associated with the IoU wrt ground truth boxes.

Bag of specials are post-processing modules and methods that do increase the inference cost but improve the accuracy of object detection as well. These can be any methods enhancing certain features of a model. For example, that can be enlarging receptive field, introducing attention mechanism, or strengthening feature integration capability, etc.

Based on all of these, the architecture of YOLOv4 consists of the following updates:

Bag of Freebies (BoF) for backbone

Authors propose a new type of data augmentation method called Mosaic that mixes 4 training images. Thus 4 different contexts are mixed, while CutMix mixes only 2 input images. This allows detection of objects outside their normal context. In addition, batch normalization calculates activation statistics from 4 different images on each layer. This signiﬁcantly reduces the need for a large mini-batch size.

In Fully-connected layers, we can apply dropoff to force the model to learn from a variety of features instead of being too confident on a few. However, this may not work for convolution layers. Neighboring positions are highly correlated. So even some of the pixels are dropped (the middle diagram below), the spatial information remains detectable. DropBlock regularization builds on a similar concept that works on convolution layers.

Instead of dropping individual pixels, a block of block_size × block_size of pixels is dropped.

Class label smoothing acts as a regularizer, a typical formulation for it can be:

where C is the number of label classes, and α is a hyperparameter that determines the amount of smoothing.

Bag of Specials (BoS) for backbone

For the past few years, researchers have paid a lot of attention to what feature maps will be fed into a layer. Sometimes, we break away from the tradition that only the previous layer is used.

How layers are connected becomes more important now, in particular for object detectors. We have discussed FPN and PAN so far as examples. The diagram below shows another neck design called BiFPN that has better accuracy and efficiency trade-offs according to the BiFPN paper.

EfficientDet is considered as one of the most accurate object detectors. Hence, some of its features can be used to improve YOLO V4. EfficientDet uses the EfficientNet as the backbone feature extractor and BiFPN as the neck.

Based on the observation, as noted in the EfficientDet paper, different input features are at different resolutions and it contributes to the output feature unequally. YOLOv4 captures this aspect of EfficientDet by using Multi-input weighted residual connections.

Bag of Freebies (BoF) for detector

Where B is the bounding box and Bgt is the ground truth box.

Generalized IoU (GIoU) fixes this by refining the loss as:

where C is the smallest box covering B and Bgt.

But this loss function tends to expand the prediction bounding box first until it is overlapped with the ground truth. Then it shrinks to increase IoU. This process requires more iterations than theoretically needed.

It introduces a new goal to reduce the central points separation between the two boxes.

Finally, Complete IoU Loss (CIoU) was introduced to increase the overlapping area of the ground truth box and the predicted box, minimize their central point distance, and maintain the consistency of the boxes’ aspect ratio. 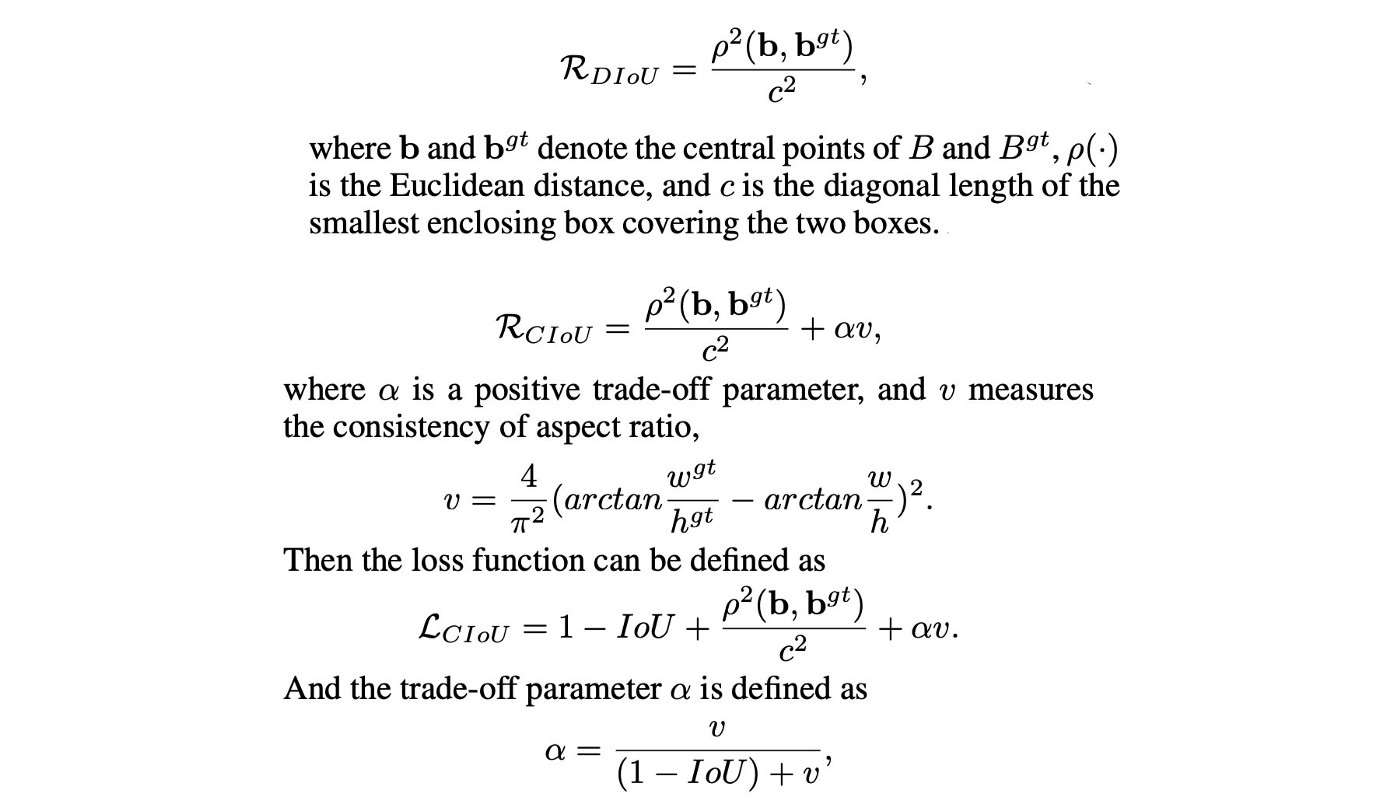 The original Batch normalization collects the mean and the variance of the samples within a mini-batch to whiten the layer input. However, if the mini-batch size is small, these estimations will be noisy. One solution is to estimate them among many mini-batches. However, as weights are changing in each iteration, the statistics collected under those weights may become inaccurate under the new weight. A naive average will be wrong. Fortunately, weights change gradually. In Cross-Iteration Batch Normalization (CBM), it estimates those statistics from k previous iterations with the adjustment, as described below: 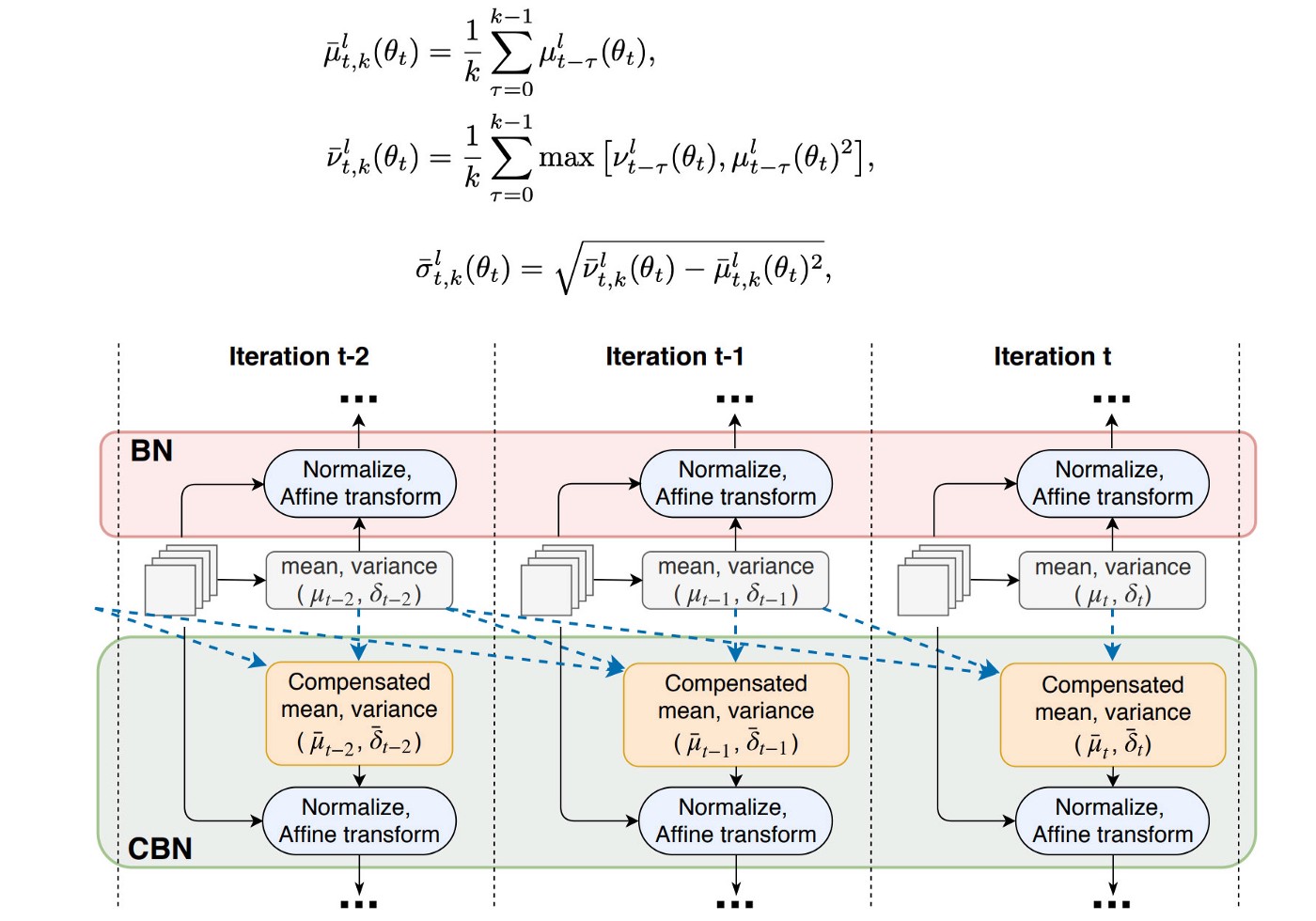 CmBN is a modified option that collects statistics only between mini-batches within a single batch.

SAT is a data augmentation technique. First, it performs a forward pass on a training sample. Traditionally, in the backpropagation, we adjust the model weights to improve the detector in detecting objects in this image. Here, it goes in the opposite direction. It changes the image such that it can degrade the detector performance the most. i.e. it creates an adversarial attack targeted for the current model even though the new image may look visually the same. Next, the model is trained with this new image with the original bounding box and class label. This helps to generalize the model and to reduce overfitting.

In YOLO, the bounding box b is computed as: 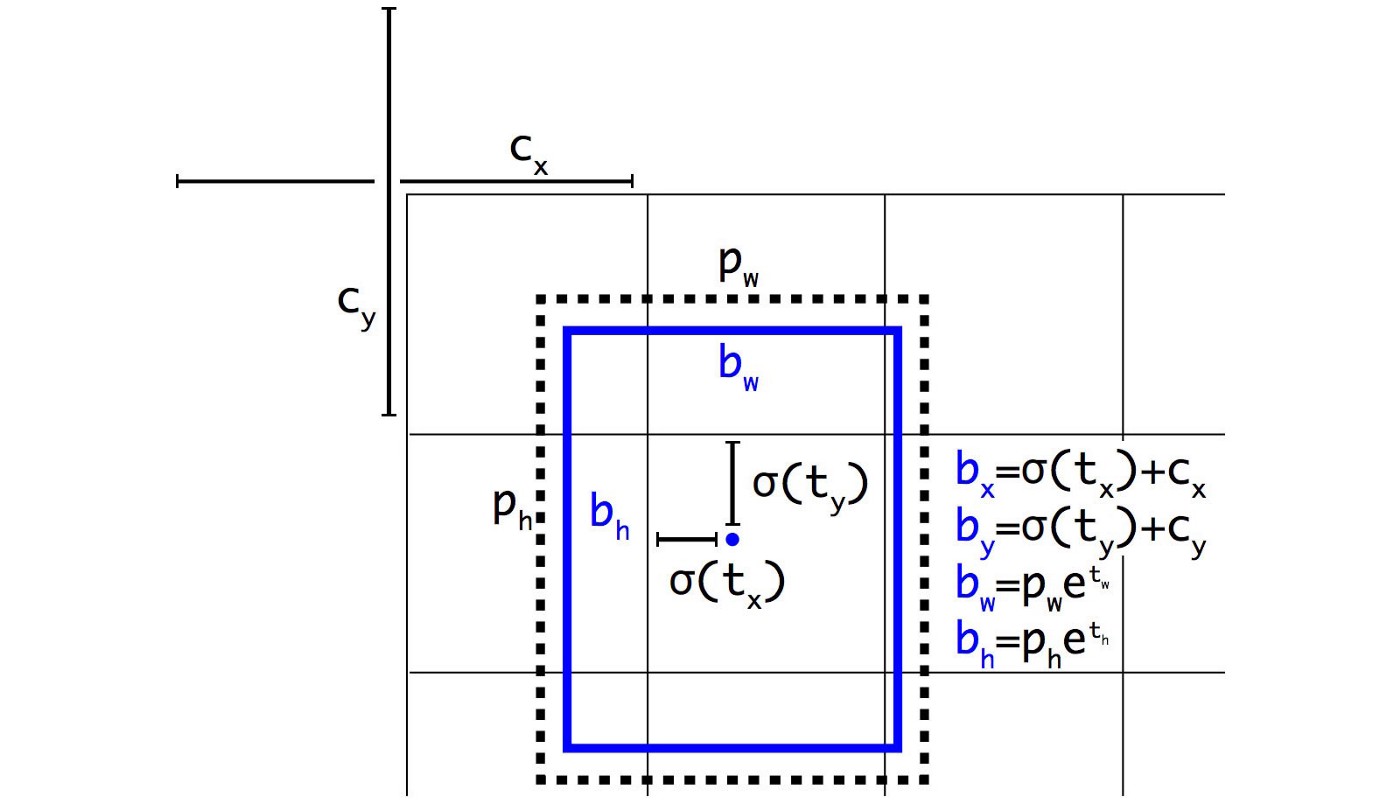 For the case bx​=cx​ and bx​=cx​+1, we need tx​ to have a huge negative and positive value, respectively. But we can multiply σ with a scaling factor (> 1.0) to make this happen quite easily.

Use multiple anchors for a single ground truth if IoU (ground truth, anchor) > IoU threshold. I am not convinced though how this helps!

Bag of Specials (BoS) for detector

Attention has widely adopted in DL designs. In SAM, maximum pool and average pool are applied separately to input feature maps to create two sets of feature maps. The results are feed into a convolution layer followed by a sigmoid function to create spatial attention.

This spatial attention mask is applied to the input feature to output the refined feature maps.

In YOLOv4, a modified SAM is used without applying the maximum and average pooling.

In YOLOv4, the FPN concept is gradually implemented/replaced with the modified SPP, PAN, and SAM.

NMS filters out other bounding boxes that predict the same object and retains one with the highest confidence.

DIoU (See Equations Above) is employed as a factor in non-maximum suppression (NMS). This method takes IoU and the distance between the central points of two bounding boxes when suppressing redundant boxes. This makes it more robust for the cases with occlusions.

A comparison of results for YOLOv4 with other object detection models on MS COCO dataset with Maxell GPU is shown in the table below. In particular here we are looking only for speed (FPS - frames per second), and accuracy (AP - average pecision and AP_small - average precision for small objects only).

Comparing results with other detectors is pretty impressive! They outperform in terms of both speed and average precision scores.

A not so thorough analysis of effects of different modifications can be found in the paper.

Feel free to email me about anything. Want some advice? Give some feedback?

You can also reach me around the web: GitHub, Twitter, LinkedIn